Rise Up: the Making of the Poor People’s Campaign

Rise Up: the Making of the Poor People's Campaign

A film by Dara Kell

On the eve of Donald Trump’s presidency, a group of clergy led by Reverend Barber, together with low wage workers choose to stand up against poverty and racism. Barber, a preacher and civil rights leader from Goldsboro NC, launches a national campaign of civil disobedience and power building – inspired by Rev. Martin Luther King’s 1968 Poor People’s Campaign. Their goal: to advance an ambitious policy agenda that will change the lives of poor and low income people in the United States

Over the course of five years, the film takes us – with unprecedented access granted – inside the world of Reverend Barber and his team as they craft their strategy and begin to accrue real political power. From a motley crew to tens of thousands united in nonviolent direct action, the new Poor People’s campaign is now a force that cannot be ignored. We witness the remarkable conversion of power from the streets to the halls of Congress and the White House, as Barber and his team meticulously create tangible policy deliverables along with a roadmap to get them enacted. Barber delivers their agenda to Congress and ultimately directly to the ears of President Biden’s administration.

Weaving together the personal and evocative story of Reverend Barber, with exclusive access to his family and the movement’s leadership, “Rise Up: Reverend Barber’s new Poor People’s Campaign” follows the inspiring journey of one of the great leaders of our time. At once an intimate portrait of a significant political leader and a gripping strategic playbook told from deep inside a movement, “Rise Up” shows how a small group of people achieved what seemed impossible: converting activism to enduring policy and societal change.

Dara Kell is a South African filmmaker and writer based in Cape Town. She is making a documentary about Reverend William Barber and civil disobedience in America. Her previous documentary as a director was “Dear Mandela,” a film about three courageous young South African slum dwellers who lead a social movement to stop mass evictions. The film was the centerpiece of a global community engagement project to inspire young people in slums to become leaders and is part of the curriculum in many law schools around the world. Her editing work was featured in the Albert Maysles film “Iris” and the Academy Award-nominated “Jesus Camp.” She worked with Doc Society to produce a podcast about women at the forefront of climate justice around the world, hosted by Mary Robinson, the former President of Ireland. Her films have been broadcast on PBS, TVFrance, and Netflix, and screened at festivals worldwide. Dara is a graduate of Rhodes University and is working towards a Master’s degree in Visual History at University of the Western Cape, South Africa. Dara’s work has been supported by the Sundance Institute, the New York State Council on the Arts and the Ford Foundation among others.

We have a rough cut, and are currently seeking post production funding to complete the film. We will release the film together with an ambitious approach to impact, using the film as a tool to help connect the voices of the people directly to policy action in the Biden administration. The impact campaign will be a platform to bear witness to the power of the voices of black and poor people being heard and deployed at the highest levels of government.

All donations for the production and distribution of Rise Up: the Making of the Poor People’s Campaign are tax-deductible to the fullest extent of the law. 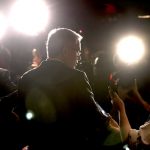