A film by Linda Midgett

Wheaton College is considered to be the “Harvard” of evangelical schools, according to director Linda Midgett, a college founded by abolitionists dedicated to rooting out slavery and racism.  Midgett herself is a graduate of the school, which she says historically has been the “keeper” of evangelical culture and a bellwether of its future.

Last December, Wheaton terminated the employment of Dr. Larycia Hawkins, a tenured, African-American professor (the first in the school’s 150-year history), after she donned a hijab as an act of solidarity with Muslim women.  Dr. Hawkins decided to wear a hijab during the Christian season of Advent to bring attention to discrimination faced by Muslim women.  She posted a photo of herself on Facebook with the explanation: “I love my Muslim neighbor because s/he deserves love by virtue of her/his human dignity.  I stand in human solidarity with my Muslim neighbor…We worship the same God.”

Within hours of posting, parents called Wheaton demanding that Dr. Hawkins be fired.  Faculty were divided.  She was put on academic leave.

The controversy continues.  Midgett will explore the fallout and unresolved issues as production of the film goes forward.

All donations for the production and distribution of Same God are tax-deductible to the fullest extent of the law. 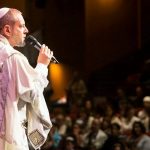