A film by Kelly Thomson and Zachary Stuart

The great strides that women are making in the vastly diverse Islamic world are the focus of Shaykha. The film is a first-person story of the journeys of three female Sufi leaders. The characters in Kelly Thomson’s and Zachary Stuart’s film are “globally interconnected” women who are striving for social transformation in diverse areas of the globe, from a mosque in Tribeca to rural Senegal to Istanbul. These women have devoted followers ranging from a few hundred to thousands.

Shaykha Fariha Friedrich is the first Western woman in her Turkish lineage to be crowned Shaykha. Friedrich guides male and female American converts and Muslim-born immigrants, all members of her Tribeca Mosque. Shaykha Oumou Malick, a business woman in Senegal, is one of the first women in that country to guide a mixed-gender congregation. She plans to break ground on her mosque in the coming year. Cemalnur Sargut of Istanbul is a Shaykha to thousands in many countries. She has a radio show and weekly television broadcast and is known as “Turkey’s Oprah.” Sargut is successor to a long line of Sufi teachers, a Quranic scholar who addresses a modern Muslim audience as she speaks out against the dogma and rigidity of fundamentalist Islam.

Shaykha is in production and a Kickstarter campaign is underway at https://www.kickstarter.com/projects/989547430/shaykha-sufi-women-lead.

More on the film at www.slyproductions.org.

All donations for the production and distribution of Shaykha are tax-deductible to the fullest extent of the law. 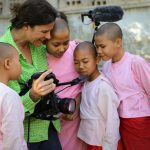