A film by Ken Ross

The Art of Repair tells the story of an ancient, reconstructed synagogue in Chania, Crete, and the diverse community who gather there to find reconciliation with the past, peace in the present, and hope for the future.

In 1944, the Nazis rounded up the entire Jewish population of Hania, close to 300 Jews, and eventually loaded them onto a ship that was torpedoed and sunk by a British submarine. Their properties were confiscated and their synagogues bombed. 2,300 years of Jewish life on the island of Crete were almost entirely obliterated.

The Art of Repair focuses on one man’s mission to reconstruct the Etz Hayyim synagogue and consecrate it as a place of prayer, recollection and reconciliation. Nikos Stavroulakis was an artist and director of the Jewish Museums of Athens, Salonika and Rhodes. He obtained a grant from the World Monument’s Fund in 1995 to rebuild Etz Hayyim. Stavroulakis artfully replaced every bench, cushion and embroidered curtains surrounding the Torah scrolls. Though not religious himself, Stavroulakis refused to allow Etz Hayyim to exist as a static museum or memorial to the dead. The Chief Rabbi of Greece challenged him: “If you want Etz Hayyim to be a house of prayer, you will need to pray there yourself.” So he began to pray there alone everyday and in the process became a practicing Jew with an ecumenical vision.

According to director Ken Ross, Stavroulakis stated: “Etz Hayyim is to be a place of reconciliation, where observant and non-observant Jews, Christians and Muslims and even agnostics can see each other and discuss common issues in an atmosphere of peace and harmony.”

The Art of Repair celebrates the transformation of profound loss into newly created Jewish continuity, inclusivity, and vitality.

Production on the film is now complete and we are in post-production.

For further information on this film, go to: www.artofrepairfilm.com

All donations for the production and distribution of The Art of Repair are tax-deductible to the fullest extent of the law. 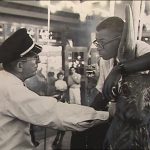