Welcome the Stranger – A Multifaith Call to Welcome Refugees from Afghanistan

However you feel about the Afghan war, right now we have the undeniable moral obligation to our Afghan allies, including an entire generation that has grown up outside the shadow of oppressive Taliban rule. Our nation is dismally failing these Afghan families, despite years of warnings. They are now surviving in what can only be called a state of dead panic.

We do not believe the propaganda coming from today’s sophisticated Taliban, trying to convince us that it’s somehow changed its ways. We cannot try to pretend that we don’t know the fate of men and boys, women and girls, under future Taliban rule. We do know. And as people of faith, our obligations are clear:

The central obsession of the Hebrew Bible—repeated dozens of times—is the obligation to care for and protect the stranger, including immigrants and refugees. Deuteronomy sets out requirements for treating refugees not just with courtesy but also with active support.

The Qur’an praises those who assist people in distress and require the faithful to protect refugees [9:100 and 117].

Buddhists explain that asylum seekers are “suffering and longing for happiness”, therefore it is a religious duty to welcome all people fleeing persecution “regardless of their ethnicity or religion.”

Sikhs call us to “see no stranger” and to love and serve all, especially those in harms’ way.

And, here in the U.S., the most repeated passage of all is from the Christian scriptures: “I was hungry and you gave me food, I was thirsty and you gave me drink, I was a stranger and you welcomed me.” [Matthew 25: 31-40]

Where is that welcome right now?

The International Rescue Committee reports that over 300,000 Afghan civilians have been “affiliated” in some way with the U.S. military. Yet Afghan refugee admissions peaked in June with 162 refugees admitted to the U.S. Just 485 Afghan refugees have been resettled since January, according to the State Department.

Then there’s the much-talked-about Special Immigrant Visa (SIV). SIV is death by bureaucracy. Fewer than 3,000 SIV Afghan applicants have been accepted into the U.S. since January, leaving as many as 50,000 applicants stuck in Afghanistan. NBC’s Richard Engel, a foreign correspondent who has spent a great deal of time in Afghanistan, makes the crucial point that this crisis of our creation is beyond the scope of the SIV which requires translating English-only documents and computer and printer access; and putting in writing one’s “complicity” with the U.S. military is tantamount to suicide under Taliban rule.

Without action, the words of our faiths are meaningless. The pitiful number of Afghan families who are safely inside our borders speaks volumes about our government’s failure to execute our moral obligation to our allies. They have put themselves in harm’s way to support our troops, and our nation. We are all safer for their work.

As leaders of faith, we join our voices with the hundreds of thousands of people of moral courage in our diverse faiths and denominations.

We are calling for a U.S.- led global effort that suspends death-by-paperwork, welcomes the stranger, and does it quickly — before she becomes a widow or orphan.

The Auburn Senior Fellows are a multifaith cohort of influential faith-inspired leaders committed to moral courage in the public square, and include: 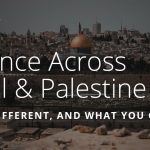