America’s Choice: The Tree Of Life or White Supremacy

I learned about the shooting at the Tree of Life Synagogue while at a cafe in New York City writing about my Jewish great-great grandparents who were forced to flee Europe after the failed revolutions of 1848.  I turned to Twitter for a moment and saw images of police, and a synagogue, and read the words that the shooter reportedly said: “All Jews Must Die”.  And I began to shake.

The families I was writing about – Goldmark, Dembitz, Wehle, and Brandeis – saw the hope of the liberal uprisings turn to despair and they fled as Jews were scapegoated, specially targeted by a monarchy seeking retribution.  One of my great-great grandfathers, Joseph Goldmark, left under the threat of execution.  They brought everything they had and came to America in the hopes of a new life.  They were refugees.

They were lucky to come when they did.  Soon after, the United States began to tighten immigration, especially by those perceived as undesirable, in other words, not white.  By 1924, as the Klu Klux Klan was at one of its high points, the government sponsored a heinous immigration act that was overtly racist against everyone but white, Christians Europeans.  Jews were among those denounced as foreign, a threat, and dangerous and they were to be kept out. It is an idea that is at the heart of antisemitism, and it has always been deadly.  It led to ships full of Jews seeking asylum from Nazi Germany being turned back to their death.

As I continued to follow the unfolding horror it was revealed that the shooter at the Tree of Life synagogue hated the Jews, but he made Jews who work for immigrant rights such at HAIS the special object of his hatred.  Just hours before he killed he posted on social media:

“HIAS likes to bring invaders in that kill our people.
I can’t sit by and watch my people get slaughtered.
Screw your optics, I’m going in”

What he means by “slaughtered” is unclear, but it is certain that by “my people” he means white people.

On such days as today, when blood stains the sacred space of the Jewish people, we must be clear that today’s atrocity is not an isolated event.  The anti-Semitism of the Tree of Life killer is part of a wider white-Christian-supremicist framework that has infected our country since our beginning and has been given new life under the Trump administration.  In 1985, cousins of my family, also direct descendants of Joseph Goldmark who came in 1848 were slaughtered in his home in Seattle along with his wife and two sons by a man who had been radicalized by an earlier smear on the family by a leader in the John Birch society to believe that the Goldmarks were communists and undermining America.  Until the Tree of Life, it was the deadliest attack on Jews in the United States history.

Now, another white man has slaughtered Jews because of the threat he was indoctrinated to believe Jews posed.   We need to look at the roots of how these white men are being radicalized.

We are seeing rising levels of anti-Semitism, Islamophobia, anti-LGBT and racist violence.  Just this week bombs were sent to journalists, politicians, and Soros, who is a holocaust survivor.   Also this week, a white man shot two black people in a grocery store in Louisville.  The white man said to a white bystander, “White people don’t kill white people” and now, at the end of the week, another white man guns down 11 people in a Jewish Synogogue.

I am writing about my ancestors as the terror continues and I am thinking of my descendants.  And yours.

Even with its horrific past and present, I do love this country, and I will defend it.  Not against immigrants who are seeking new lives here just as my ancestors did, but from the threat within.  I am not worried about a caravan of pilgrims looking to escape oppression in Central America, instead I am focused on the radicalized, white christian identified men who are terrorizing our citizens with the rhetorical and political support of the president of our county.

My ancestors came to this country to seek freedom and safety, and I am dedicated to working with all those whose heart is breaking at our current crisis. It is a time for people of all faiths to come together, reject the hate and work for the future of our nation where there there is no supremacy by any one group, and all are welcome, there is equity for all and that the tree of life bears fruit for all.

Send a prayer or note of love and support to the communities at Tree of Life / Or L’Simcha, Pittsburgh, PA, and let them know you’re joining them in the pursuit of justice. 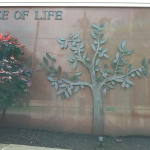 Auburn Senior Fellows Statement: Nationalism has No Branch on the Tree of LifeVoices