As We Mourn The Murders In Christchurch, We Need a Love Revolution

Waking up this morning to the news of yet another massacre in a house of worship, I wept so
hard it made me sick to my stomach. I ache for all my Muslim siblings in Christchurch, whose
lives were cut short, whose sense of safety is shattered, whose mosques are desecrated. I stand
with you, and am praying for your broken hearts. And all over the globe, wives will now ask
their husbands to stay home from prayer; young women will question wearing their hijabs; and
Sikhs will be mistaken for Muslim because of their turbans. These acts of terror do terrorize us,
and for this I also mourn.

Echoes of Oak Creek, Charlottesville and Pittsburgh float on the hoarse, sinister, and persistent
voice of a White Supremacist ideology that has masqueraded as religion through the ages.
White men in charge created a white male god, who blessed those in power, and cursed those
on the margins. The god they’ve created is a collection of their projections; he is punitive,
angry, judgmental, selfish and harsh. Their god is anti-Semitic, and is decidedly against Muslims,
Blacks, and Latinx folk. Their god is sexist, classist and homophobic.

This puny, white male god has low self-esteem, but has had power enough to cause the Crusades, the Doctrine of
Discovery, and the genocide of Jews and indigenous people around the globe. Their god
inspired a theology of Apartheid, enslaved Africans, and is destroying our Mama earth, in the
name of greed. Their god values the right to carry guns more than the right to live, work, play
and pray without fear of gun violence.

It is important on a day like today for us to be really clear about how hyper-masculinity, racism,
and the policies of nations like ours lead to the destruction of lives. Hate speech, Muslim bans,
anti-immigrant sentiment, the dismantling of Civil Rights, the banning of Trans-folks from the
military, anti-Black racism in law enforcement, and rising xenophobia and antisemitism testify
to what happens when racist fascism rises to power: Hate rises to power!

Here are three ways to push back on the hatred: 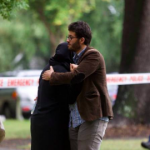 What Are White People Doing About The White Supremacy Threat?Voices 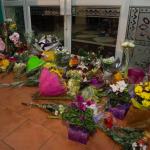