As America survives the midterm elections, the nation can celebrate now having greater control to provide checks and balances to the current administration. America can celebrate the greater representation of people of color and women in office. And America can also acknowledge and laud the many critical constitutional ballot measures passed, including Amendment 4 in Florida, which automatically restores voting rights in the state for people previously convicted of felonies.

Today, Florida’s incarceration rates stand out internationally as shown in the Prison Policy chart below. 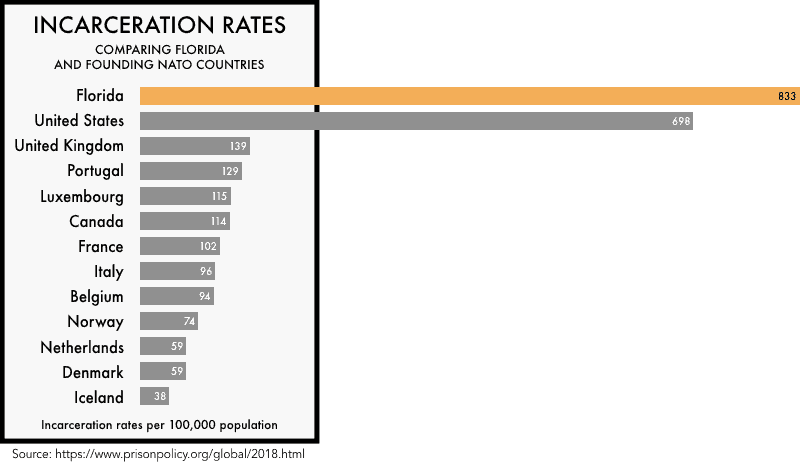 The more than 418,000 black people – who, in 2016, had been disproportionately arrested and incarcerated but completed their sentences but still not allowed to vote due to a felony record – are Americans who can certainly celebrate.

So what exactly is Amendment 4? On November 6, 2018, voters were given the option to vote yes or no to automatically restore the right to vote for people with prior felony convictions, except those convicted of murder or a felony sexual offense, upon completion of their sentences, including prison, parole, and probation. Close to 65% of voters voted yes.

Now that Amendment 4 has been passed, it will be critical that the multi-faith community hold elected officials to the fire and demand implementation of restored rights. It is also important to look beyond disenfranchisement and fight for justice throughout the entire prison system. Bryan Stevenson, author of ‘Just Mercy’ and founder of Equal Justice Movement, the nonprofit organization behind the Legacy Museum Memorial in Montgomery, Alabama, provides great insight into why this is important and also why the faith community should be at the forefront of such change.

According to Stevenson, justice is central to faith and democracies, yet in the US mass incarceration remains a systemic issue. The Sentencing Project, reports that there are 2.2 million people in the nation’s prisons and jails—a 500% increase over the last 40 years.  Likewise, there has been a 64% increase of women in US prisons. Changes in law and policy, not changes in crime rates, explain most of this increase – resulting in overcrowded prisons and fiscal burdens on states – even with increasing evidence that large-scale incarceration is not an effective means of achieving public safety. 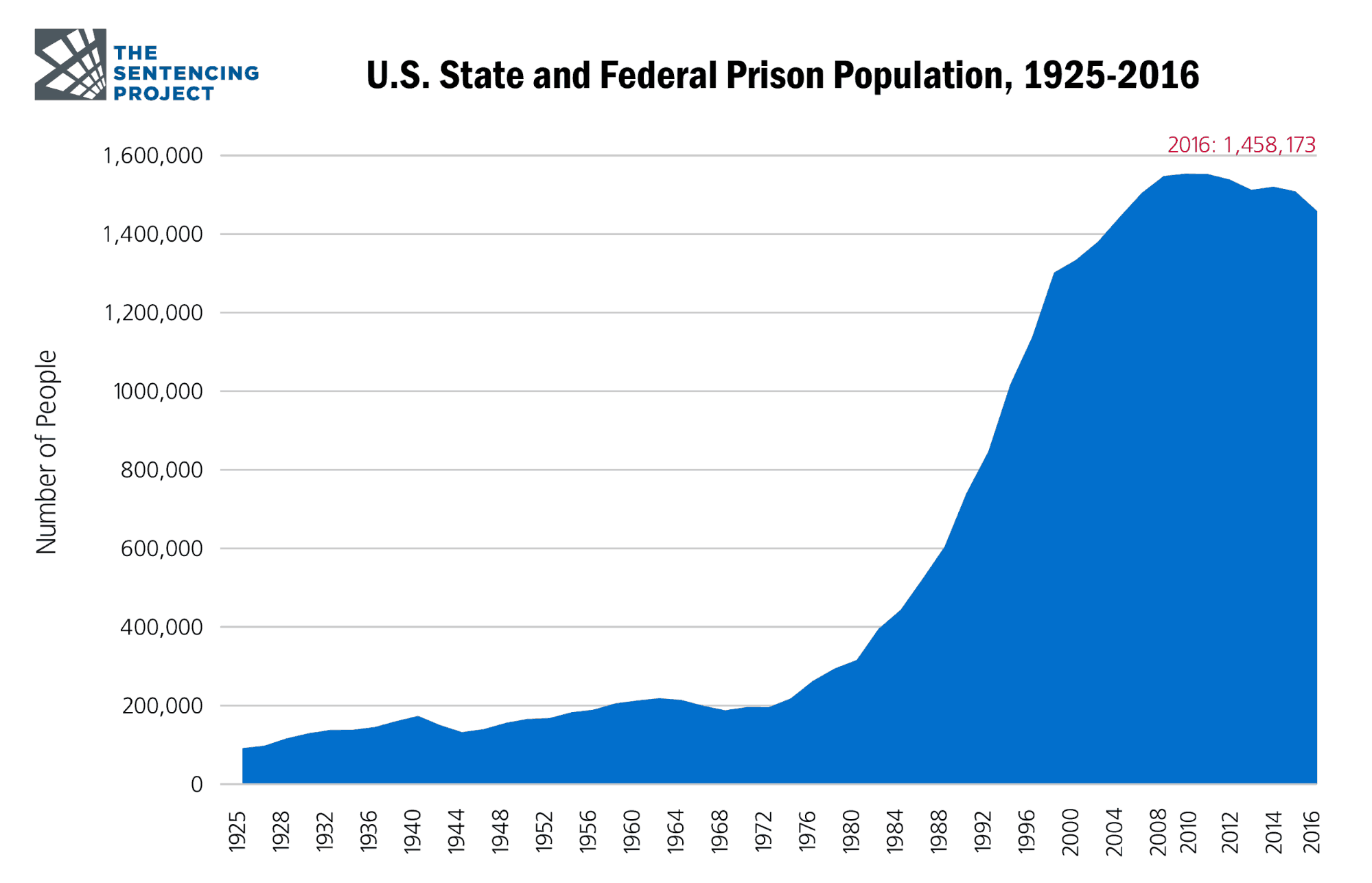 As such, stats disrupt the lives of children and future generations, Stevenson described how the youth he encounters in Alabama have an expectation of incarceration and loss of hope with their “gotta go get mine while I can” attitudes. It’s shameful that 1 in 3 Black boys and 1 in 6 Latino boys are expected to go to jail. And after prison, in terms of disenfranchisement, 30% of the male black population loses the right to vote. Today, one out of every 13 African-Americans is prohibited from casting a ballot in the United States (See map below). 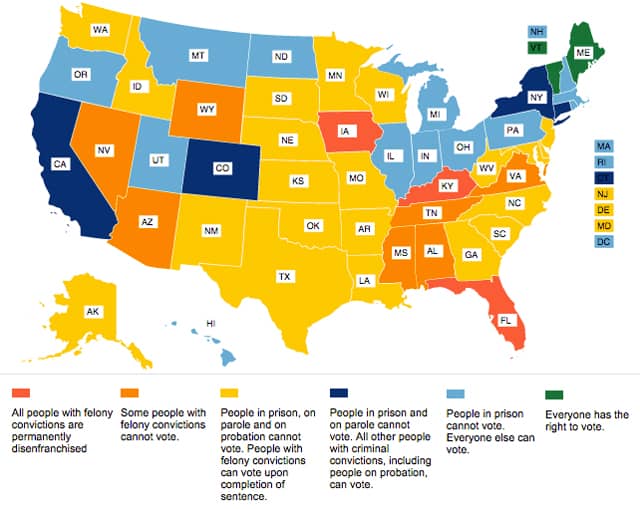 So whether you felt America won or lost on election day, it is important that the multi-faith community keep striving for a just society that seeks fairness for our imprisoned population. At a recent talk at Union Theological Seminary, Stephenson offered some thoughtful solutions to creating a more just society:

First we must find ways to reach the poor and excluded since there is power in proximity.

Faith leaders should find ways to get closer to those who have been ignored, shunned and stigmatized – positioning ourselves where injustice prevails (like a grandmother’s hug – that lasts forever). I’m sure it did not feel like a hug when South Carolina officials repeatedly urged coastal residents to flee Hurricane Florence, warning of danger and even death, as they also rejected calls to move the inmates of a state prison in a mandatory evacuation zone. I’m also sure that warm fuzzy’s aren’t felt as newly-released prisoners experience the profound disorientation as they reenter society.

“Often, the psychological turbulence of those first days or weeks is so debilitating that recently incarcerated people can’t even navigate public transportation; they’re too frightened of crowds, too intimidated or mystified by the transit cards that have replaced cash and tokens.” New York Times.

Second, the faith community must change the narratives underlying the broader issues.

According to Stevenson, we have mass incarceration because a decision was made to declare “War on Drugs.” The following graph underscores how the U.S. prison population began steadily increasing upon the launching of the war on drugs. 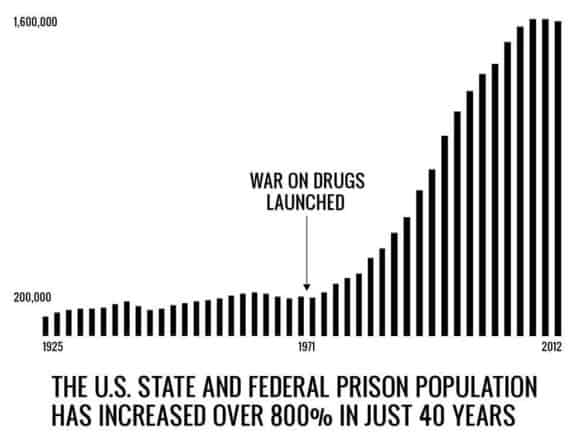 From the 80s and into the aughts, “drugs and crime” was one word for politicians. Drugs followed crime, or vice versa, and drug use was rarely discussed as anything other than a menace: “Public Enemy No. 1.” (Vice 2018)

However, narratives like these have not been used for alcoholics who struggle with drinking. Children of the 90s were “super predators” so we began placing them in adult prisons because “some children aren’t children.” Even though this ‘get tough’ rhetoric is changing due to an unprecedented uptick in overdose deaths initially affecting white people, the politics of fear and anger are essential ingredients of oppression. There still remains a smog in the air of racial injustice. Our parents and grandparents talk about it. We must talk more about the history of racism and genocide.

We must talk about prison life and inmates.

Can you name one lynching victim? Most Americans can’t.

Stevenson adds that talks of the Civil Rights Movement have been too celebratory. We need to get real about the conditions. If you go to South Africa, they are talking about apartheid. Go to Rwanda, they’re talking about genocide. Go to Berlin, there is a Holocaust Memorial. In the US, we don’t talk about it. People get nervous. This is the reason for the Legacy Museum. Confession leads to Liberation.

We must look past the bigotry and hatred. Get to the core of the issue. Stay hopeful that change is possible. For me, this talk is critical for faith leaders and other change agents in light of the recent mass shooting at Tree of LIfe in Pittsburgh and in light of all the hate-filled, divisive rhetoric that seems to be “greenlighted” in favor of power, money or some false nationalist narrative.

Fourth, good people must position themselves in uncomfortable places – do what’s inconvenient.

What’s inconvenient could include making hundreds of phone calls and knocking on hundreds of doors to get out the vote, meeting the real needs of homeless women, men and children, encouraging prison inmates through prophetic conversations and creative talent, never ceasing to contact your local representative and having honest discussions about race and inequality with friends and family members who have become complacent or resistant.

Fifth, acknowledge that we too are broken.

In our contemporary culture, we are bombarded with messages and images that hold up unattainable standards of perfection. We are supposed to have the perfect body, the highest-paying job, the largest church, the most impactful organization, and so forth. Acknowledging our imperfection is regarded as something to be avoided, yet it is a key virtue of many faith traditions across the world. It is brokenness that gets us to faith, hope and justice.

At Union Theological, Stevenson concluded his powerful talk by asking “what role should the faith community play?’ The faith community has been present, but often in the shadows, during historic, monumental social change events.  Today, it’s time for faith leaders to BE AT THE FRONT. In light of mass voter suppression across the nation, Auburn senior fellows and staff were at the forefront prior to the midterms, primarily in Arizona, Georgia, Florida and Wisconsin – organizing communities and bringing attention to key local and national issues.

In line with Bryan Stevenson’s message to be in close proximity to those who have been “left out” in this era of mass incarceration, Auburn, along with Atlanta’s Ebenezer Baptist Church and The Temple, both in Atlanta, is organizing a convening that will help place faith leaders  at the forefront of ending mass incarceration throughout the nation. The first conference is scheduled for June 2019. Stay posted for more information.

Join Auburn at the front as we acknowledge our brokenness, get uncomfortable, maintain hope, learn the issues, correct the narratives; and fight for those left out and excluded.

Chanda Burrage is a Postdoctoral Research Fellow at Auburn. 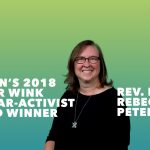 Rise to the Challenge of Justice: Celebrating The Rev. Dr. Rebecca PetersScholar-Activism, Voices 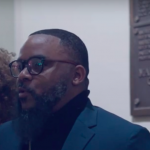