How And Why the Crucifixion Is Still Happening Today

I’ve been pondering the specter of lynching as a very real way to talk about how the horrific act of crucifixion still happens today. It is, for white Christians, a repressed memory of our own participation in the crowds shouting for Jesus to be crucified. As in this picture of the lynching of three circus workers, Elias Clayton, Elmer Jackson, and Isaac McGhie, in Duluth, MN, this killing of black bodies served to keep white power in place. The question that haunts me is, if Easter is God’s response to such human violence against one another, why does it not inspire more dramatic actions against violence of all sorts, racially motivated or otherwise, on the part of Christians?

As Christians across the globe have just celebrated their most holy festival, called in some places Easter and others Pascha, I find myself pondering if such anti-racism and anti-violence work that Easter should catalyze is blocked by the way we regard the significance of Good Friday.

The classic story, of course, is the one many of Christians, including me, learned as children. “Jesus died for my sins.” I’ve come to believe this simple formula is problematic in at least a couple of ways: it spiritualizes, and individualizes, the crucifixion. At its most basic, this version of the meaning of the crucifixion works this way. My sin makes me guilty, but rather than my paying the debt, Jesus stands in my place, taking the punishment for my sin, and releasing me from the burden of guilt. In its place, I receive the spiritual benefit of forgiveness of sins and I experience new life here, and in the hereafter. Notice what happens in this traditional version: it is about Jesus’ suffering then, and my spiritual benefit now.

There is an alternative, one that both makes more sense of Jesus’ suffering and of its relevance today for the horrors of racialized violence. Dr. James Cone, the black liberation theologian, offers an alternative in his recent book connecting the cross and the lynching tree. He notes that over the course of 2000 years, the cross has been detached from the ongoing suffering and oppression of those he calls “the crucified peoples of history.”

Lynching, literally hanging someone on a tree, Cone argues, is exactly what the ancient authorities did to Jesus, and it was directly in response to the ways his embodiment of God’s justice and love threatened to upend the powers of the Roman Empire and the local ruling authority in Jerusalem. Empire always protects its own power and wealth, and does it by violent oppression of the vulnerable. It was so in Pharaoh’s Egypt. It was so in Herod’s Palestine. And it has been so in these United States, built on the land stolen from Native peoples, built on the labor of African slaves, and generations of immigrants—from the Americas, from Asia, and elsewhere.

The pattern of spectacle lynching, the ritual of it, developed after the 1867 Reconstruction Act granting Blacks freedom—political, economic, and social. This newly gained freedom was unacceptable to most whites, Southern or otherwise, as the Duluth lynching shows. At this same time, the Ku Klux Klan formed to insure white Christian power remained as it was. In the ritual of lynching, a trumped-up accusation led to a mob scene, sometimes a sham trial, and then literally stringing the person up in front of the crowd, often with souvenir postcards and belongings of the victim serving as mementos of the event. The lynching terrorized the African-American population, having the effect of silencing, of profound repression, and producing the Great Migration out of the south to northern cities where, people hoped, they would find less hostile opportunities to build a life.

The biblical accounts of Jesus’ crucifixion, Cone points out, fit the lynching pattern remarkably well. The trumped up charges. The sham trial. The terror in his disciples who fled in fear, even poor Peter. The brave women stayed, near by, hoping against hope to turn the tide of events. Then the beating and hanging up on the tree. The mocking and shouting from the crowd. The dividing up of his belongings. And finally his dying, alone.

It is such a horribly familiar story, not only in the ancient world but also throughout history, up to today. While literal lynching is now rare, Cone argues the prison—and a system of criminalization of Black people leading to mass incarceration–has replaced the lynching tree in America. There are, Cone tells us, more African Americans in prison than in college. Similar realities of suffering and oppression are the daily experience of many marginalized peoples–women, LGBTQ persons, Native peoples, immigrants, and more.

Ultimately, looking at the cross from the perspective of the lynching tree shows how God’s desire for love, for mercy, for justice, was a risk of love. Cone’s goal in connecting the cross and the lynching tree is to find afresh the liberating power of the cross to heal, to ‘save’ us. The Latin root of salvation is ‘salvus’ to heal. Yet it is not just a spiritual, individual salvation he has in mind. The powers of death at work in the world crucified Jesus, and lynched black people in the United States.

For Jesus, God’s love and mercy had to be shown neither by flight, or fight, but rather by standing “in the places where it mattered.” This “third way” of nonviolent resistance points to a long tradition of resistance movements, including the anti-slavery and anti-lynching movements, but also movements against police brutality in Baton Rouge and Baltimore and North Minneapolis, and against violation of Native lands at Standing Rock.

In these and in so many more places, in brave beauty and dignity, people stand where it matters. They stand, as Jesus stands, risking for love today. There are no easy answers for Christians who try to live facing the horror of crucifixion and lynching. There is much pain and soul-searching.

Yet, Christians can stand together as Easter people to tell a more honest story about ourselves, about this world, and about the God who will not abandon us. God’s love for the world took flesh, and stood among us, and stands among us still, risking love in the places in our lives, in this world, where we desperately need liberation and healing.

The Rev. Dr. Christian Scharen is Vice President of Applied Research and leads of the Center for the Study of Theological Education at Auburn. 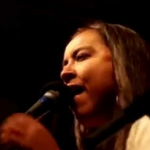