I was honored to serve as Chaplain of the Week at the Chautauqua Institute where I preached a sermon series called “Seeking for A City.”

The Chautauqua Institute has welcomed so many from the Auburn Seminary family to its community over the years. Just this summer alone, Chautauqua welcomed Auburn Senior Fellow Rev. Michael Ray Matthews as chaplain for the week, and Auburn Senior Fellow Wajahat Ali as lecturer on the ethical foundations of a fully functioning society. Sadly, just two weeks after my time at Chautauqua, the community witnessed the violent attack on author Salman Rushdie as he was preparing to deliver a public lecture in the context of a thematic focus on the United States as asylum for writers and other artists in exile and as a home for freedom of creative expression. I invite all to remember Mr. Rushdie, his family, and all in the Chautauqua Institution community with compassion.

My sermon series was born from a question –  “how can America be America for us all?” I am a descendent of enslaved Black Americans.  I know that the promise of a democracy of the people, by the people, and for the people is powerful. The promise has inspired millions of people across the world. And yet, this promise has never been given the real possibility for blossoming as too many of America’s people, not just Black Americans, have been left out of the vision and potential for freedom. Are people who can get pregnant included in America’s vision as citizens with rights and protections? Are LGBTQIA persons included in the vision as citizens with rights to create the families they desire? Will America not protect all of its citizens from nationalist religion?

The Supreme Court gutted the Voting Rights Act almost a decade ago and has now taken away our right to have full agency over our bodies. With its recent rulings, it has declared open hostility on a bigger vision of democracy that includes all citizens, and it has weakened the foundation of that democracy by showing preferential treatment to religion.

America must be America for us all.It will be. But until it is, we choose citizenship in a country that does not yet exist, a country we resolve to continue building together that is vibrantly democratic, multifaith, and multiracial, a city of hope where all can thrive.

Choosing citizenship in what does not yet exist requires inspired moral imagination.  I challenged people to keep singing, to keep journeying with their neighbors,  and to see themselves troubling the waters of struggle that historian Vincent Harding says have always existed. Those with a vision of a world beyond their own interests have always stepped up to be transformed by the waters, working with others to realize a world they knew was possible.

At this critical moment in American history, that is what we at Auburn Seminary are committing to do. We declare citizenship in the world where we all belong and thrive. l hope you’ll join us in making it so.

Summer Highlights
Since 2017, our Thriving in Ministry project has gathered regional and affinity groups of early-career faith and spirit-rooted community leaders across the US for respite, peer support, and generative connections with elders.In June, our team worked with Rev. Nicole Diroff and Aram Mitchell (The BTS Center) to host 15 spiritual ecology leaders from the north-eastern US in Portland, Maine. We explored our ancestral connections to land, place, and ecology. This fall, we meet online monthly, and participants are using microgrants to extend their community leadership and organizing.
Read More.
After a three-year hiatus due to Covid constraints, in July we welcomed the 2022 APRIL Auburn Research Colloquium. This year our cohort included scholars, artists, activists, and faith leaders who convened to work collaboratively on “Harm and Repair.” Each participant had an opportunity to present their work to the group and receive feedback. Members left with new perspectives on their work and new horizons for bringing it to the public— including the option to publish in CrossCurrents journal. Our annual colloquium is presented with APRIL – The Association for Public Religion and Intellectual Life.

The Prophetic Preaching Lab is an intergenerational, inclusive opportunity for young leaders to connect more fully to Black Church traditions and activism.

In June, Auburn’s team accompanied the Prophetic Preaching Lab on a larger group pilgrimage to Charleston, South Carolina, co-hosted by Freedom Road US and Trinity United Church of Christ. As part of a 190-person group, we traced the faith, cultural, and organizing legacies of the Black Atlantic diaspora, which passed from West Africa through the port of Charleston. Charleston was the first place in the Americas that many enslaved Africans touched land after being trafficked across the Atlantic Ocean, so it is like Ellis Island for more than 40% of contemporary Black Americans.

Auburn’s President Emerita Rev. Dr. Katharine Henderson delivered a personal, powerful statement in her role as the Interim President of the Interfaith Alliance. She writes:

My hope is that we will face down the spirit of fear that gets inside us. That we will use whatever power we have well–through conversation and persuasion, donations, and the vote. That we will love one another as we build a world where all can thrive, especially those on the margins. We need each other!

And congratulations to Auburn’s beloved friend, Paul Raushenbush, who was recently named president of the Interfaith Alliance!
Notes from the Field: Summer 20222022-08-222022-08-31https://auburnseminary.org/wp-content/uploads/2017/02/auburnheaderlogoonlyx2.pngAuburn Seminaryhttps://auburnseminary.org/wp-content/uploads/2022/08/auburn_troublewaters_2000x1200.png200px200px
Recent Posts
Donate Join Us
Contact Us Press Releases 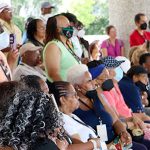 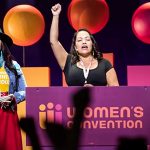 We Won’t Go Back. Now Now, Not Ever.Featured, Voices