The Prophetic Preaching Lab is an intergenerational, inclusive opportunity for young leaders to connect more fully to Black Church traditions and activism.

In June, Auburn’s team accompanied the Prophetic Preaching Lab on a larger group pilgrimage to Charleston, South Carolina, co-hosted by Freedom Road US and Trinity United Church of Christ. As part of a 190-person group, we traced the faith, cultural, and organizing legacies of the Black Atlantic diaspora, which passed from West Africa through the port of Charleston. Charleston was the first place in the Americas that many enslaved Africans touched land after being trafficked across the Atlantic Ocean, so it is like Ellis Island for more than 40% of contemporary Black Americans.

Moderated by Rev. Dr. Otis Moss, III, and the Auburn team, Prophetic Preaching Lab participants explore speaking truth to power, understanding and naming dehumanizing systems, deploying theological and practical wisdom for healing, and working through faith to act for good in the world.

This summer we participated in pilgrimage stops and theological reflection at the Charleston Battery and auction sites, the International African American Museum, and the Penn Center on Saint Helena Island, the first school for freed Black Southerners in the post-emancipation era.

We also met with leaders at Mother Emanuel African Methodist Episcopal Church, who still hold vigil in memory of the nine church members killed during Bible study in 2015, and talked with Sunn m’Cheaux, a cultureworker who teaches Gullah at Harvard.

For Prophetic Preaching Lab participants, some of whom pastor AME churches, these experiences were a salient, complicated reminder that White supremacist violence includes political repression and gentrification as well as mass shootings, and that vibrant Black faith communities can still be a powerful hub for building refuge and power and passing on stories of challenge, courage, and culture.

As spiritual leaders, we considered questions like who determines which community stories get transmitted or licensed by the mainstream? How might we disrupt the tendency to turn history into fairy tales? How can song and humor support counternarratives during experiences of marginalization or intra-community conflict? How might faith leaders live into our position as culture-keepers and advocate for collective well-being and solidarity?

Auburn made two gifts parallel to the Charleston program: one to the Coastal Community Foundation of South Carolina to support the Seventh Mother Emanuel AME Commemoration Service for the Martyred, and the other in partnership with the congregation at Trinity UCC to support the International African American Museum, which opens to the public in January 2023. 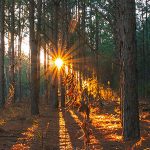 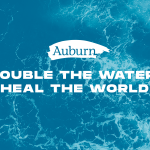