Protecting the Water at Standing Rock

This was the first thing we heard when we arrived at the Water Protectors camp established by the Standing Rock Sioux Tribe and inhabited by representatives of over 100 Tribal nations. It was sung, in Lakota, by all who knew it at the invitation of a Lakota elder.

I had come as a UCC clergyperson with three other non-Native people to be “witnesses and interpreters” at the behest of Rev. Marlene Helgamo, pastor of All Nations Indian Church and Director of the Council on American Indian Ministries in the United Church of Christ to help protect the water.

The impact to the Missouri River when a spill happens from the planned Dakota Access Pipeline, will be catastrophic.

We were asked to be here on these particular days because September 9th is the day a federal judge is to rule on whether the DAPL must undergo an environmental impact review.

But as the day unfolded, I experienced the other, equally important reason I had come—to stand in solidarity with Native leaders.

The song “We are Alive” brought me to tears. In the face of over 500 years of attempted genocide, broken treaties, concentration camps, forced marches, boarding schools, cultural genocide—most of it perpetrated by my fellow Christians—this was a gathering that said #NativeLivesMatter. It was a camp of shared food, shared clothing, shared school supplies and it was filled with music and ceremony and prayer.

At one point, we were all invited down to the riverside (a movement that wasn’t lost on me as I contemplated John the Baptist and the writers of “Ain’t Gonna Study War No More”) to welcome representatives of several Pacific Coast nations who had paddled across Lake Oahe and were coming up the Missouri to bless the water and stand in solidarity with Standing Rock. As they paddled past us, people shouted out blessings and one child in particular greeted each new canoe with “water is sacred.”

As the evening closed, we were invited to a pipe ceremony. The invitation alone was an act of deep honoring. I know that as a white, non-Native person, this is sacred space that is not mine. And I couldn’t help praying as the pipe came to rest in my left hand, that I would do justice to the honor bestowed upon me as a witness and interpreter of this sacred, revolutionary space.

Rebecca Voelkel is a Pastor, Theologian, and Movement Builder. Which Voices leave you wanting to hear more? Email us ideas for interviews at [email protected] 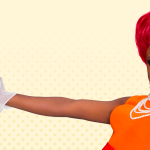 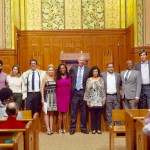 Responding to 9/11 With Faith, Not FearVoices