A quiet but powerful march took place in Philadelphia, indicating a new direction in the faith-driven environmental justice movement in America.

A coalition of climate activists and poverty activists walked through five counties and ended in Philadelphia to demand increases in solar power and the jobs it provides. The event, called Power Local Green Jobs, was the brainchild of Earth Quaker Action Team (EQUAT ) and Philadelphians Organized to Witness Empower and Rebuild (POWER), a group consisting of more than 40 congregations around the city and led by Reverend Greg Holston, an African American pastor who is intent on making the connection between economic and environmental justice.

“Every single day, folks tell me about struggling to support their families. They need jobs, not programs. It’s time to build a green city that works for all,” — Rev. Greg Holston

Rev. Holston was joined in the march by Bishop Dwayne Royster of Living Water United Church of Christ, another Black faith leader from Philadelphia whose congregation is deeply rooted within the traditions of the African-American Church.

Pastors like Holston and Royster view environmental justice as a spiritual and justice issue, and are among a growing number of faith leaders of color who are taking leadership roles within the environmental movement.

Bill McKibben, a White environmental justice advocate and founder of the climate-focused grassroots organization  350.org, was marching in Philadelphia alongside Rev. Holston and Bishop Royster. He is happy to see that leadership is changing to include more people of color.

“The first in line for the power and jobs would be frontline communities. That’s who was leading the way at the big climate march in Washington D.C. on April 29. I hope this change continues,” McKibben said.

This change is happening in part because of increasing recognition that communities of color are often most adversely affected in cases of environmental injustice.  When Melissa Mays of Flint, Michigan, had had enough of the foul-smelling brown water flowing from her tap, one of the groups she turned to was Concerned Pastors for Social Justice,  a network of religious leaders from more than 30 predominantly African-American churches in Flint and surrounding communities.

Formed more than a half-century ago to safeguard the lives of the underserved in the city, the network fought hard alongside the residents of Flint, who are over 60 percent African American or Hispanic, during water crisis that has been engulfing the city since 2014. 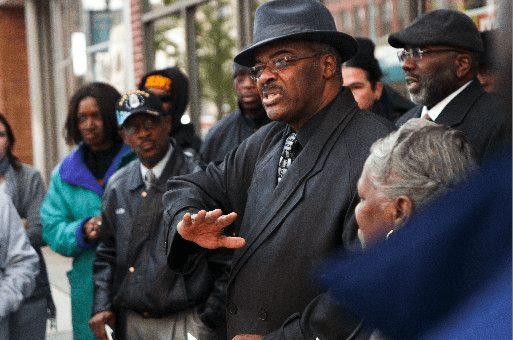 The Rev. Alfred Harris, president of the Concerned Pastors for Social Action (via Flint Journal)

Last year, Concerned Pastors became one of the plaintiffs to file a lawsuit against the state and city officials requiring them to comply with Safe Drinking Water Act.

Just two months ago, plaintiffs and the state of Michigan agreed to settle the lawsuit for almost $100 million, and to replace miles of lead pipelines. Pastor Allen Overton of Concerned Pastors says they hope the settlement “helps heal the damage.”

In an effort to fight for environmental justice, the new breed of religious activists of color are putting together guidelines and taking concrete steps toward a better, broader, and more inclusive environmental movement in their racially diverse communities.

Alaura Carter, the Climate Justice Associate at Sojourners and a member of the committee that organized the People’s Climate March in Washington D.C. in April, thinks that environment, like any other national issue, has a racial component.

“People of color in the United States are exposed to 38 percent more asthma-producing nitrogen dioxide than are White people.. [and] are twice as likely as Whites to live without potable water or modern sanitation.” — Alaura Carter, Climate Justice Associate at Sojourners

By focusing on people and their daily lived experiences instead of theological ideas around faith and the environment, faith leaders of color are able to avoid the vagaries of what Carter calls the “big green” blanket movements, which “sometimes overlook the people on the ground or do not represent them accurately,” Carter added. 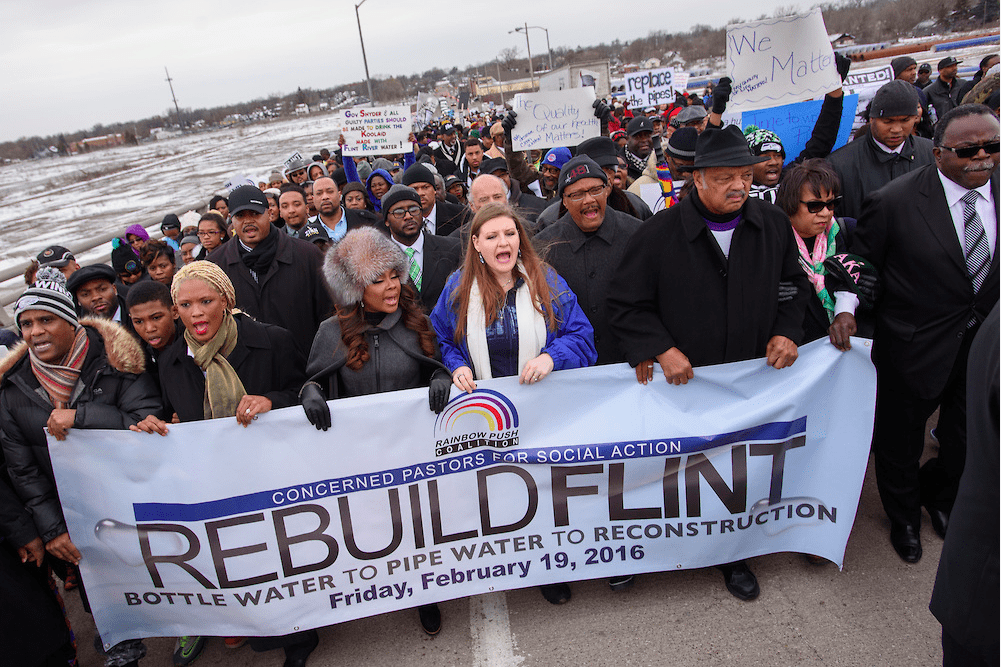 Reverend Leo Woodberry is the pastor of Kingdom Living Temple, an independent African-American church in Florence, South Carolina, a place hit by extreme weather such as the flooding in 2015 and Hurricane Matthew last year.

In March, Rev. Woodberry helped organize a free climate change event for his community.  Speakers and groups from across the northeast and southeast came to train the citizens of Florence in the devastating impacts of climate change.

“Training people on what we need to do, whether we are in the middle of a heat wave and you have citizens who don’t have adequate cooling or cold weather where people don’t have adequate heating, is how we can address those problems and concerns,” said Rev. Woodberry.

Also one of the organizers of People’s Climate March, he often talks about “environomics“, referring to the intersection point “… where the economy and environment meet and allows corporate polluters to come into communities and dump toxins because it’s profitable for them.”

“Environomics is … where the economy and environment meet and allows corporate polluters to come into communities and dump toxins because it’s profitable for them.” — Rev. Leo Woodberry, Kingdom Living Temple, S.C.

Reverend Dr. Neddy Astudillo is a leading Latina eco-theologian with the faith-based environmental advocacy group GreenFaith, and has recently attended National GreenLatinos summit in Monterrey, California. She emphasizes the connection between faith and ecology, including the need to live in healthy communities.

“When environmentalists and people of faith begin to work together and question the present social-environmental crisis, we clearly see how we can not achieve social justice without environmental justice and vice versa. All the players need to be at the table to seek solutions, or those that aren’t ‘will be on the menu’,” Rev. Astudillo said.

“Climate Change may be the most far-reaching manifestation of white privilege and class privilege yet to face humankind. Climate change is caused overwhelmingly by the world’s high-consuming people who are disproportionately descendants of Europe.” Cynthia D. Moe-Lobeda (Copyright: M.Wuerker, Politico)

Some environmental justice leaders seek inspiration from the holy books.

Ibrahim Abdul-Matin is the Director of Community Affairs in Environmental Protection Department, overseeing 8.5 million people who drink or use New York City water every day. As a Muslim African American and author of the book Green Deen: What Islam Teaches About Protecting the Planet — “deen” means “religion” in Arabic — he believes that like all prophetic traditions, Islam also has at its very core an ecological imperative. In his advocacy for environmental justice for the underprivileged and the vulnerable communities, Abdul-Matin says he draws on the notion of “adl” (“justice”), one of the names of God in Islam:

“‘Adl’ is rooted in the notion of balance…When there’s too much extraction from the earth, when people are working really hard but not making enough to live decently, when a small group of people have more than most people… then things are unbalanced and you have injustice,” he said. 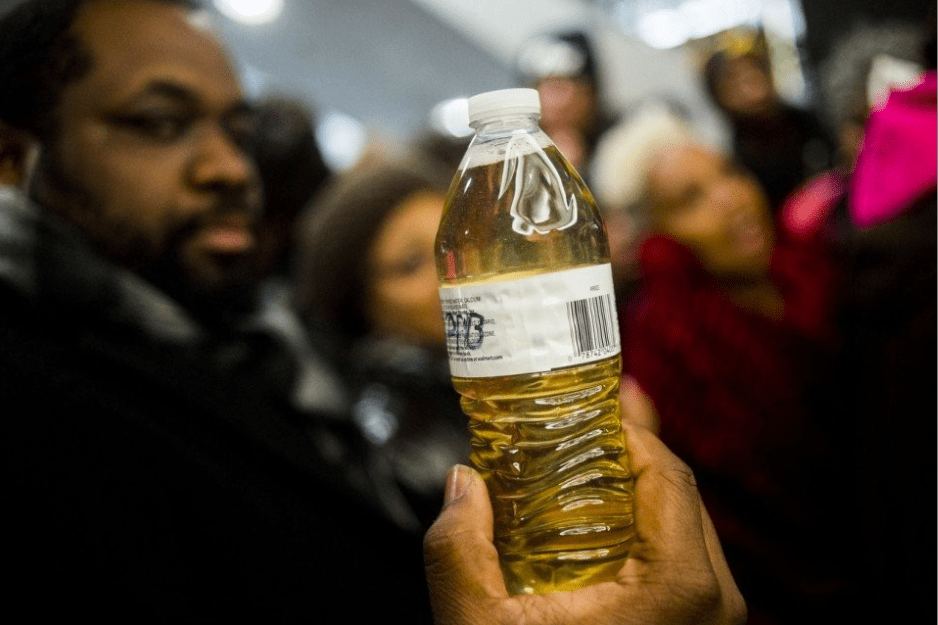 A pastor holds up a bottle of Flint water during protests outside of Michigan Gov. Rick Snyder’s office in 2015. (via Reddit)

Ilgin Beygo Yorulmaz is a reporter for Auburn Voices — a media platform by Auburn Seminary for the multi-faith movement for social justice. Follow us on Facebook and Twitter. 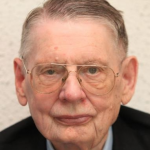 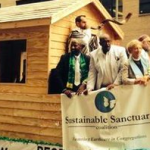 Lawrence Jennings on Race and Environment: “Our Reality Determines the Focus and Level of Our Activism”Voices