I have experienced arrest for civil disobedience in Washington, DC, before, twice. On June 12th, I arrived early at the New York Avenue Presbyterian Church so I could attend the orientation for those willing to risk arrest for nonviolent direct action on Moral Witness Wednesday when about 400 faith leaders responded to the call from Rev. Dr. William Barber of the Poor People’s Campaign to process through the streets to the White House together.

This is God’s message: Attend to matters of justice.

We were turning into action the words of Jeremiah 22:1-3: “God’s orders: Go to the royal palace and deliver this Message. Say, ‘Listen to what God says, O King of Judah, you who sit on David’s throne–you and your officials and all the people who go in and out of these palace gates. This is God’s message: Attend to matters of justice. Set things right between people. Rescue victims from their exploiters. Don’t take advantage of the homeless, the orphans, the widows. Stop the murdering!” (Eugene Peterson, The Message)

And some of us were ready to step across the line of trespass, up to the iron gates of the White House, then, most likely get arrested for a misdemeanor requiring a fine or a court appearance and community service. This was what the organizers had settled upon with the National Park Police and the DC Police. This kind of cooperation between the protestors and the police is what I had experienced in April, 2016, incommoding on the Capitol steps for campaign finance reform with Democracy Spring and with The Center for Popular Democracy when we disrupted Congress during the debate and vote on the Tax Cut in December, 2017. Every day, the police forces in Washington and the passionate like me, together, balance the American tension between dissent and order.

Then, in the middle of this choreography on June 12th, the rules changed.

I had prayerfully chosen not to risk arrest that day. I felt my place was to give spiritual support to those who would be arrested so I filled in behind them as they walked through Lafayette Park to cross Pennsylvania Avenue toward the White House gates. But they stopped pretty quickly. A metal barrier prevented leaving the park there and yellow caution tape had been hung along the light poles between the sidewalk and the street. The police standing in the empty street informed us that crossing this line would be considered a felony with all the potential punishment that entails.

The police standing in the empty street informed us that crossing this line would be considered a felony with all the potential punishment that entails.

I heard that protests earlier in the day had proceeded in accord with our expectations of misdemeanor and fine. I heard that the force dictating these changes in the line for trespass and the punishment for violation was the Secret Service.

I was both relieved and disappointed when Dr. Barber deemed the effort to this point the fulfillment of the call in Jeremiah. The petitions with 5,000 signatures supporting this prophetic plea for justice and righteousness–meant to be fastened to the White House gates–were attached to the metal barriers in Lafayette Park. I walked out of the park, caught a taxi to the airport and returned home. I am ready to respond to Dr. Barber’s call, should it come again.

But I tremble, I confess, at the apparent escalating cost of that discipleship. I tremble at the implications of this sudden, jerking, shift in the long-established rules for civil disobedience in our nation’s capital.

But I tremble, I confess, at the apparent escalating cost of that discipleship. I tremble at the implications of this sudden, jerking, shift in the long-established rules for civil disobedience in our nation’s capital. Of course, the police forces there have always had the power to do this. I read their restraint as a systemic respect for what the protesters are doing. I read the abrupt exercise of police power last Wednesday as an erosion of that respect for patriotic principles which is a signature aspect of the Trump administration.

I understand that this was nowhere near as bad as Sudan where hundreds of protesters were killed or wounded by armed forces. It was not tear gas or clubs that police in other American cities have used, particularly against demonstrations proclaiming Black Lives Matter. I will say it is a step closer to those violent expressions of raw power against free expression.

A line was crossed on June 12th but not by the religious leaders in Lafayette Square.

My spirit cries out that this moment is really important. A line was crossed on June 12th but not by the religious leaders in Lafayette Square. The threat of government power coming down hard when we march in Washington is real no matter what arrangements are made between activists and law enforcement now.

I need to be ready when Dr. Barber calls the faithful again to gather to speak with one moral voice for justice and righteousness not only to join the throng but also to risk the full and unknown consequences of nonviolent direct action. And I tremble.

Rev. Dr. Janet Edwards is a Presbyterian Minister and Activist.  She is on the Board of Auburn Seminary. 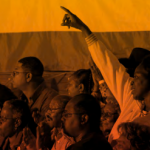 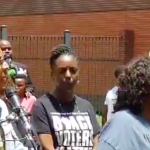