Last week, I did another first. Yes, even a middle aged woman can have a first and it was radical and transformative.

I responded to a call to action immediately with no planning, no foresight.

Last Saturday was supposed to be a day of rest and recovery from the first week of the new presidency. It had been an intense week of processing too much information and figuring out next steps. I woke up very groggy from an afternoon nap and was catching up on FaceBook. I saw something about people gathering at JFK Airport in response to the latest Executive Order banning travelers from seven countries. I saw that a friend was working on going out there. I started to feel anxious and infuriated. And then it hit me – the latest EO included banning immigrants.

That’s when it became personal. I’m an immigrant with US citizenship. I came from a Korea and this EO could have been my personal nightmare. While wiping the sleep from my eyes, I decided I was going to join the protesters at the airport and in less than an hour, I was on the road.

This was not my first activist moment. I’ve been in the movement for a long time – marching, attending rallies and meetings, organizing and mobilizing communities. In fact, just one week ago I marched with the throngs on the streets of NYC at the Women’s March. Protesting was not new to me.

What was new was to respond so quickly, with almost no thought or pre-planning. I did hesitate to go because our community of support had not been put on notice to step in to help my boys in case something happens, and the mundane chores such as dinner and laundry that make our daily lives possible were left untended.

The hardest for me is my 16 year old son’s recent awareness of the consequences of a civil disobedience arrest. The last time I was this active was in his pre-teen years and he was still innocent and unaware of the possible outcomes – as it should be for a child. Not anymore. Nonetheless, he lets me go because he and I know, only by participating in the movement and at points, putting yourself at risk, change happens.

The impact of the protests at JFK Airport and other airports across the country was multiplied by the rapid response of so many. By Saturday night, just over 24 hours after the EO was issued, there were thousands of people publicly and loudly standing in opposition – demanding that immigrants and refugees be granted access to our country.

The good (and bad) news is that there is so much more to do. It’s a long challenging list and I’ve learned the hard way that one must pace oneself. One day later, on Sunday, I joined the Rally & March to end the Refugee & Muslim Ban and as a result of two back-to-back rallies, I blew out my voice. I find myself five days later still nursing a sore throat. While slowing down to allow my body to heal, I’m working on other less physically taxing actions. They include calls to my representatives, sharing information where and whenever possible, helping to plan actions and more.

The roadmap on this battle is not short and pacing oneself will be critical. Even more critical is to act for it is the collective that will be heard and every single voice makes the collective stronger.

Jeannie Lee is manager of facilities and hospitality at Auburn Seminary.

Muslims Find Beauty and Solidarity Amidst The UglinessVoices 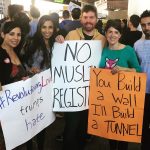 Announcing a Day of Revolutionary Love…Voices