It is a time for a New Year and a New America!

This was Rev. Dr. William Barber’s stirring message to the Jewish congregants on the first day of Rosh Hashanah on Thursday September 21st, at IKAR in Los Angeles.

Dr. Barber is Pastor of Greenleaf Christian Church, Disciples of Christ in Goldsboro, North Carolina and a leading voice and organizer of the Poor People’s Campaign: A National Call for Moral Revival.  He came to the Jewish congregation at the invitation of Rabbi Sharon Brous who is the founder and Senior Rabbi at IKAR.   Rev. Barber and Rabbi Brous became friends through the Senior Fellows program at Auburn.

“Dr Barber is a tremendous source of inspiration for me as a rabbi and an American. His voice is a clarion call in tumultuous times, a bright light of moral clarity and prophetic wisdom. We were thrilled and honored to have him address our community. There were about 2,000 American Jews there, spiritually awake and eager to help bend the arc of the moral universe toward love and justice.”

And then she followed up:

“It honestly was one of the best days of my life.”

Dr. Barber spoke just after Mayor Garcetti, a member of the IKAR community, and just before Rabbi Brous’ sermon and the shofar service, which is appropriate because Dr. Barber ended his remarks saying

“I have come here to hear the blowing of the shofar and to call us all to become shofars for a new year and a new reality until we are one nation under God for liberty and justice for all.   God bless you.”

Watch the full video of Dr. Barber at IKAR and read the transcript below.

Transcription of Dr. Barber’s reflection at IKAR in Los Angeles:

As we are moving across the country with Rabbis, Imams, Christians, people of faith, people not necessarily of faith, organizing for a new Poor People’s Campaign and a National Call for Moral Revival to address systemic racism, systemic poverty, ecological devastation and the war economy, and to transform our national morality to where once again, as Rabbi Heschel said to John Kennedy a month before the march on Washington, he said to the President “until we get this issue of race right, we forfeit our right to worship God.”

Dr. King was killed and we believe that when prophets fall the new generation should go to where they fell, reach down in the blood and pick up the baton and carry on.

Our nation is in need of a New Year. Not just a new day on the calendar but a New Year.   A year where the poor are lifted, not isolated. A time when we no longer see politicians and others afraid to even say the name “poor.”

There are 110 million poor and working people – they need a new year when everybody has a guaranteed living wage.  We need a New Year. They are 37 million people who still are not covered with health care and they need a year where they know that health care is not a matter of a political party’s decision but a fundamental human right that’s available to everybody. We need a New Year.

Your tradition has to speak to this nation – that the brother or sister who is a sojourner should be treated in the land just like one is a blood brother or sister. We need a New Year where we do take care of this earth rather than destroy it. And we need a New Year where we move away from war mongering. If we want to fight, let’s fight to get everybody education, let’s fight to get everyone health care. Let’s fight to honor everybody regardless of their race, their creed their color, or their sexuality.

Indeed, we must announce that it is time for a New Year. So I have come here to hear the blowing of the shofar and to call us all to become shofars for a New Year and a new reality until we are one nation under God for liberty and justice for all.   God bless you. 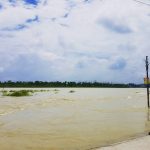 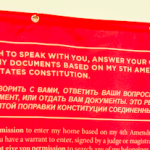