Rev. Traci Blackmon: It Is Time To Stop Calling God By Other Names When You Really Want To Call God Capitalism

"It is time to stop calling God by other names when you really want to call God capitalism. It is time to stop cloaking your greed in religious language." —Rev. Traci Blackmon protesting the Senate GOP’s healthcare bill outside Sen. Mitch McConnell’s office today.

The Holy Spirt was alive at the US Capital today and She was NOT having it.

As the Senate Republicans moved closer to a vote on a health care bill that would leave millions uninsured and guarantee the death of thousands, a multifaith collection of leaders, including Auburn Senior Fellows Rev. Dr. William Barber and Rev. Jen Butler, decided to pay a visit to Senator Mitch McConnell to bear witness to the devastation that would be unleashed on the most vulnerable of the American public if the bill were to be passed.

Joining them was the Rev. Traci Blackmon, who called out Senator Mitch McConnell for pushing for a bill that guarantees people of his home state of Kentucky will suffer saying: “You will be okay, your friends will be okay, but the people who put you in office will suffer because of this bill.”

The United Church of Christ pastor went on to decry the blasphemy that was passing for piety at the Capital under the current administration:

“It is time to stop calling God by other names when you really want to call God ‘capitalism’.  It is time to stop cloaking your greed in religious language. I’m here to tell you that there is nothing right about the religion that is happening in these halls.”

Rev. Jennifer Butler of Faith in Public Life joined in the condemnation of the proposed legislation:

“This is not a health care bill. It is a death bill. And we are here to urge life. We stand for life, not death.”

The protest ended with Rev. Dr. Barber, Rev. Traci Blackmon, and nine others arrested for the crime of preaching righteousness and standing for and with the most vulnerable as their religious traditions demand. We thank God for them and the millions and millions more faithful Americans they represent. 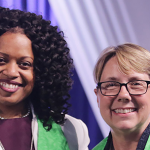 And Ye Shall Be Changed: The Resurrection of the Mainline ChurchVoices 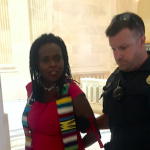