Standing Rock: Collective Confession and Repentance Was Our First Action

“What lesson did you learn from today,” I asked my 9-year-old daughter.

I had brought her to the Clergy Call at Standing Rock because my partner and I (two middle-aged, white lesbian Christians) are trying to raise her (a white, Christian girl) to know both her power and agency AND her responsibility to work for justice. We don’t know exactly how to teach these lessons—since we are still trying to learn them ourselves. But we hope that acting for justice and sharing those experiences might be one part of that.

“I learned that Christians did and still do some terrible things to indigenous people and we have to change that.”

She pretty well summed up the reason that I and 524 other clergy showed up at Standing Rock. We had come to fight the Dakota Access Pipeline. But our first action was, denomination by denomination, to repudiate the Doctrine of Discovery.

This Doctrine was a series of Papal Bulls which said that Christians had the right, and, indeed the blessing of the Church, to kill any non-Christians and claim possession of their lands and resources. This Doctrine was woven into US law when, in 1823 in Johnson v. McIntosh, the US Supreme Court ruled that the United States inherited the American conquest from the English. And, in 1845, the phrase Manifest Destiny was used to affirm that the US was called by Providence to dominate the continent—Manifest Destiny grew out of, and was based upon, the Doctrine of Discovery.

Christians did and still do terrible things to indigenous people. We have to change that. Click to Tweet

And as my daughter so wisely sad, this is not past history. The Doctrine of Discovery is alive and well in the Dakota Access Pipeline.

So, on Nov. 3, I joined over 500 clergy to say no to genocide, cultural degradation and raping of the land. It was a public confession and collective repentance. As Father John Floberg said to a group of deputies guarding the Dakota Access Pipeline:

“You are protecting a pipeline that was put in place because of a Church doctrine and we are here to say that we were wrong.”

But this confession and repentance won’t mean much unless they are accompanied by genuine repair. Helping stop the DAPL is a place to start. Indeed, it is an important place. But it is only the beginning of our faithful action.

As faith leaders begin to organize across the country to support the Standing Rock Nation, please sign the petition asking President Obama to put pressure on those with the power to deny the pipeline permit, and start an investigation into the extreme use of force by militarized police against the peaceful water protectors.

The Rev. Dr. Rebecca Voelkel is a pastor, theologian, and movement builder based out of Minneapolis. She is the Executive Director of the Center For Sustainable Justice, and a movement building consultant at Auburn. 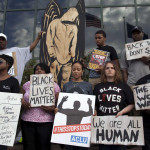 Why We Must Tell Stories Of Suffering This Election SeasonVoices 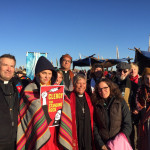 At Standing Rock, Over 500 Clergy Answer The Call To Reconcile and Stand WitnessVoices