Faith Leaders’ Call This Passover and Easter: 1. Stand Up 2. Speak Up

Not far from The Riverside Church in Harlem where Rev. Martin Luther King, Jr. gave his famous Vietnam speech 50 years ago, an interfaith march took place Wednesday to speak up for the marginalized in the politically charged environment of recent times.

STANDING UPtown for Religious Tolerance was the brainchild of Jewish Theological Seminary on 122nd Street and was co-sponsored by over 30 faith institutions, from Auburn Seminary to the Women’s League of Conservative Judaism, which came together to stand shoulder to shoulder against bigotry, racism and intolerance towards the marginalized.

Organized just days before Passover and Easter, the march aimed to herald the creation of an interfaith coalition in Harlem and Morningside Heights to welcome the “stranger”, fight for racial and social justice, and promote religious tolerance.

The sound of shofars kickstarted the event — a reminder to come out of the comfort and convenience of their silos and “be uncomfortable,” and be pro-active.

The opening remarks from faith leaders, whose calm but firm voices often go unheard amidst the cacophony of opposing voices, pointed to the need for unity as they stand up against, racism, sexism, homophobia, anti-Semitism, and Islamophobia.

Reflecting on the meaning of Passover for Jewish slaves 2,000 years ago, Jewish Theological Seminary Chancellor Dr. Arnold Eisner said it resembled “today’s spiritual slavery” and quoted the ancient lines “This year we are slaves. But next year we’ll be free.” He urged free people to “use your freedom, abilities and resources to free other people,” and emphasized the strength of the word “We,” asking people to go out and meet others they haven’t met yet in their synagogue, church, mosque, community and city. He said:

In his address to the crowd, Imam Talib Abdur-Rashid of the Mosque of Islamic Brotherhood declared a firm commitment to a beloved community:

“All Mighty God declares the oneness of humanity… uplifts and establishes justice…denounces intolerance and bigotry. And we are listening.”

Dr. Debbie Almontaser of the Muslim Community Network reminded the march goers the importance of speaking up for their neighbors and recited the German Protestant pastor and concentration camp survivor Martin Niemöller’s famous poem, which begins with the line “First they came for the socialists…” She applauded building bridges of solidarity between Jews and Muslims who cooperated to repair recently desecrated Jewish graves, and added:

“Fear is a choice, my brothers and sisters, and we will not allow it to divide us.”

Themes like the inclusion of all people as well as racial and economic equality as envisioned by Dr. King 50 years ago were frequently mentioned during speeches preceding the march.

Reverend Lisa Jenkins from St. Matthew’s Baptist Church in Harlem galvanized marchers by recounting the tale of Jesus marching with those oppressed and marginalized by the Roman Empire into Jerusalem, the seat of economic and religious power much like today’s New York, on a Palm Sunday. Rev. Jenkins said:

“The term [the oppressed who raised their palms] used that day many years ago was ‘Hosanna! (Save us!) from the hand of the enemy’… Today, over two thousand of years later, in one of the wealthiest cities in the world, we will march because oppression,…systemic racism, … misogynistic voices, … religious intolerance … still exist. Justice is cloaked and righteousness is stiffened. But we will triumph!…We walk in unity, because this is our promised land.”

Reverend John Vaughn, Executive Vice President of Auburn Seminary, said of the march: “This is love in action today.”

“[My parents] taught me by their words and actions that accepting everyone was a part of life. It didn’t matter; you didn’t have to like everybody, but you had to love everybody…[irrespective of] race, gender, sexual orientation, nationality,” he said, “… by respecting and valuing the gifts and the talents of each person.”

Several high ranking New York City officials were also present at the event and later on marched with the citizens on the streets.

Manhattan Borough President Gale Brewer said, “There needs to be greater tolerance and equal protection for all members of the community,” before confessing, “although it’s said easier than done.” Drawing on the ethnic, racial and faith-based diversity of the borough she is presiding — “This is our heritage,” she said — Brewer told the attendants an anecdote from that morning at Hunter College where she teaches, saying that a show of hands to the question “How many of you are born in the U.S.?” revealed only one hand as opposed to 20 in the class who were born outside the U.S.

City Comptroller Scott Stringer revealed some important figures about immigrants and New York City: “Immigrants from 150 different different countries generate $100 billion of income in New York. They pay billions of dollars in taxes, and own 83,000 businesses.”

Some people in the march talked to Auburn Voices about their motivation to come to a march in a diverse place like New York City.

Farley Lord, a native of Atlanta and currently the Stewardship and Development Officer of The Riverside Church, said that as a relatively newcomer to this city, she finds many “New York moments” every day and regards the city to be iconic in diversity.   Imam Abdus-Sabir of the Mosque of Islamic Brotherhood said, “We need unity among people. We all breathe the same air, drink the same water. We need to learn from each other.” Gabriel Kowitz, a student rabbi who traveled from Temple Sinai in Middletown, New York to attend the march said, “For future religious leaders like us, it is important to be an example for others to defend against injustice and for social action.”

Protesters young and old, holding slogans like “We All Belong Here” marched from the Jewish Theological Seminary all the way to the National Black Theatre on Fifth Avenue and 125th Street, stopping at places of worship such as the Interchurch Center and the Mosque of Islamic Brotherhood on the way. They sang songs, including “Towards Justice” written especially for the march by the Jewish Theological Seminary, which took its inspiration from the famous Martin Luther King, Jr. quote favored by many: “The arc of the moral universe is long, but it bends towards justice.” 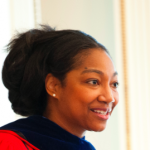 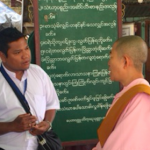 Myanmar Christians And the Struggle to be FaithfulCongregations & Movements, Voices