The End of White Christian America

Dr. Robert P. Jones is one of the leading voices at the intersection of religion and politics in America today, and the author of the just-released The End of White Christian America (Simon and Schuster, 2016). The New York Times has called it “quite possibly the most illuminating text for this election year.”  I sat down with him last week to talk about his new book and its relation to the current state of politics in the U.S.

Rev. Dr. Christian Scharen: So what is the story of the book? Why this book now?

Dr. Robert P. Jones: As I looked at the data, I began to realize that we were almost at this tipping point, three or four years ago, we were at 51% White Christian America (WCA) population, and as I watched this, over a couple years, I’d see a percentage drop, and another percentage drop, and pretty soon we were at 45% in the country. I realized that is a big deal so that set the stage for writing the book, and thinking more broadly about it.

CS: I’m curious how your own story—raised in the Southern Baptist Church in Jackson, Mississippi—shows up in this book.

RJ: The argument of the book is based in social science research, but it’s right that what you see in the data is influenced by all kinds of things, including one’s personal background. It matters that I’m a white Southerner who grew up in Jackson, Mississippi, with deep roots in Macon, Georgia that go back a couple centuries; that it wasn’t till second grade [1976] that our schools were actually integrated; that I can remember going to my soccer games at this field called Battlefield Park, and not infrequently seeing the KKK on the street corners collecting money.

I remember going to my soccer games, and seeing the KKK on the street corners. Click to Tweet

CS: Those experiences clearly led you to highlight the issue of race in the book. How do you respond to the events of this past week, with the violence in Baton Rouge, St. Paul, and Dallas?

RJ: In the book, one of the most striking stats on this issue is from the social networks study we did. If you ask the question, not just “do you rub shoulders with anyone who is Black,” but [who are] your close friendships – people who the last time you had a major issue, you might have talked with them… White people report their network is 91% White, 1% Black. When you have that kind of social segregation on top of the geographic segregation, church segregation, it looks pretty tough to overcome.

And even among White people who desire to do something about racism, too many White congregations wanting to move directly to reconciliation, without much accounting for the persistent structural injustices that still remain and are rooted in WCA legacies. They just want to wrap their arms around their African-American neighbors and say, “Let’s be friends,” you know, “Aren’t we all good now? We have a Black president,” and it’s just not that simple.

CS: You argue there is a whole demographic of WCA who have been displaced by the changes in American, and are angry. You call them “nostalgia voters,” which I find fascinating.

They really feel this, and their temptation is to reach back to this time in the past. With Trump’s slogan, “Make America Great Again,” it’s that “again” piece that is the powerful piece even more than the “make America great,” Evangelicals hear something very specific in that promise. For example, back in January, Trump was at an Evangelical Christian college in Iowa and he explicitly said “I’m going to restore power to the Christian churches. When I am president you will have a friend in the White House. There’ll be no more of this Happy Holidays stuff. We are going to say Merry Christmas in this country.” Basically, Trump converted Evangelicals from “values voters” to “nostalgia voters” because they are so afraid of losing their place in American society.

CS: I was struck by your warning about trying to resurrect White Christian America!

RJ: The only theological riff in the book! I think the line is, “Resurrection by human and not divine power always produces a monstrosity.” Alternatives to the nostalgia are out there. For example, Russell Moore at the Southern Baptist Church (SBC) is a really interesting pivotal figure. He wrote a book (Onward: Engaging the Culture without Losing the Gospel, B&H Books 2015) that is trying to carve out some of this space. He’s also been very critical of Trump. He hasn’t endorsed him. I argue that he’s not quite gotten fully to the place of acceptance of the new realities, but he’s trying to carve out another space.

CS: I think the particularly progressive views of the Millennial generation offers some hope looking forward. You gesture to this, and I’d love to hear more.

RJ: I do talk at the end of the book about how the Millennial generation, as they have come of age, have lived in a much more diverse world. They’ve not grown up with the assumptions of White Protestant dominance that their parents and grandparents did, so that’s really hopeful in terms of having to work in coalitions, for working across lines of difference. There is a cautionary tale, however, for White working-class Millennial men, who’ve tried to play by the rules, who have had a really hard time in this economy, who got out of high school and college just as the recession hit, and just below the surface there is some racial resentment, some economic anxiety. So it is not all “rose-colored glasses,” but there are more resources and fewer barriers in that generation to solve some of our social problems.

CS: Especially when you consider mainline WCA, they continue to control substantial resources. How to you think about that challenge, finding a new mode for using their properties and endowments?

RJ: I do think there is a moment where, if they could step back… Take the metaphor of a death, where a patient has clearly died but you’re keeping them on life support, spending all kinds of resources on them. You can do that till you bankrupt the bank account, or you can accept the patient has died, and think about what to do with the inheritance. Just to do a little theological riff here, I’m going to steal this from you: kenosis, this self-emptying way of being church in the world, is a powerful one, and if literally they could think about kenosis and emptying the coffers to do some good in the world, I think it would be game-changing. Think what those resources could do for poverty, for race relations, if the right things got set up.

CS: So, I have to ask how it went when you told your faithful, church-going parents you were dedicating this book to them!

RJ: (Laughter) I tried to lay it out carefully in the acknowledgements — I actually wanted to write it first, so I didn’t say anything to them, I just let them read it before I said any more to them. I do say and I hope this comes through in the book, that even though we are at the end of an era in the country’s life, WCA has gifted the country with a lot of good things — a lot of bad things, too — but certainly some enduring good things. I want my parents to know they have handed down to me some good things that were a part of that world. When I think about my kids, I hope I am handing down to them the best of that world, too, while being more than willing to let the worst of it go.

Rev. Dr. Christian Scharen is the Vice President of Applied Research and leads the Center for the Study of Theological Education at Auburn. Which Voices leave you wanting to hear more? Email us ideas for interviews at [email protected] 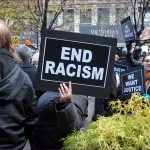 On the Matter of Black Lives…Voices 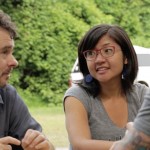 How to Take Wild Goose Into the WorldVoices