What Are White People Doing About The White Supremacy Threat?

Think globally, act locally has been a guiding philosophy of many movements and in our current technological moment, the local is immediately and vividly available globally.  The murder of 49 Muslim people in New Zealand brings this home as the shooter decided to livestream the horror he was perpetrating on Facebook for the world to see. The video was meant to be widely viewed and shared in order to embolden others guided by the same religio/political outlook in other places around the world.  We have seen this technique used by militant groups of all backgrounds, and we have taken these radical movements deadly seriously and put billions of dollars into combating them.

It is time for us to treat white supremacist terrorism as the global threat it is and to respond.

It is time for us to treat white supremacist terrorism as the global threat it is and to respond.

Over the past few years we have seen white supremacist attacks in Oak Creek, Wisconsin, Charleston, South Carolina, Quebec City, Canada, Otoya Island, Norway, Pittsburgh, PA and most recently ChristChurch, New Zealand. They are just a partial list of places white supremacists have murdered hundreds of people to further their radical ideology – and yet the response is still piecemeal, treating each incident as somehow an aberration rather than manifestations of an ideology with objectives and violent strategies to achieve them.

The global rise of white supremacy must be confronted by a concerted effort by governments and security forces, responding with urgency and resources. The fact that this is not completely clear is evidence of how deep white supremacist logic is embedded in many western countries, including America. It is up to each of us to insist that this threat be taken seriously with immediate action, and make clear that silence can only be understood as acquiescence.

Yet white supremacy, like any other violent ideology cannot be defeated by security forces alone.  When ISIS became acknowledged as a global threat (that primarily targeting Muslims) there were a lot of questions thrown at the wider Muslim world about why they were not addressing radicalism within their community –  unfairly, and irresponsibly blaming every Muslim for any act of terror done by ISIS. Of course, Muslim groups around the world were responding, creating program after program to combat the radicalization of young people, and reaching out beyond their walls to create solidarity with other religious groups.

One has to ask, then, what is the response of white people to white supremacist attacks?  Will we accept responsibility for people who claim to be acting on our behalf for the protection of a culture and religion that we supposedly share

One has to ask, then, what is the response of white people to white supremacist attacks?  Will we accept responsibility for people who claim to be acting on our behalf for the protection of a culture and religion that we supposedly share. Muslims today, along with Jewish, Sikh and others would be completely justified in asking where these white people were being radicalized and what are the White Christian people of the world doing to stop it?

As a White, Protestant minister, I do feel a responsibility for what happened in a town called ChristChurch. I, and all of my white colleagues in the clergy must use our pulpits to take a stand and insist that this will not be done in our name ever again. Too often Christian identity is a used as a cloak for white supremacy, and we must name it as the blasphemy it is. I will use all of my resources and moral suasion to work against this vile and hateful ideology that purports to speak for me.

Too often Christian identity is a used as a cloak for white supremacy, and we must name it as the blasphemy it is.

I am speaking to all white people now – will you join me? President Trump, I call upon you to renounce your explicit as well as tacit support for white supremacy as President of the country I love. Will we look carefully at the rhetoric coming from pundits and politicians who offer dog whistles across the world? Will we recognize how perniciously white supremacy  infects our judicial, educational, prison systems, and religious institutions?

What we do locally will have global significance. Speaking up and speaking out against white supremacy and for a world that values diversity, welcome, pluralism and equity has become all of our responsibilities. Lives are at stake. Our own collective future depends on it. 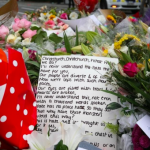 As We Mourn The Murders In Christchurch, We Need a Love RevolutionVoices