Will America Pick Up Its Cross?

On Saturday, August 12, in Charlottesville, I was faced with a choice: “Would I pick up my cross?”

Jesus warns his disciples: “If any want to become my followers, let them deny themselves and take up their cross and follow me. For those who want to save their life will lose it, and those who lose their life for my sake, and for the sake of the gospel, will save it.” (Mark 8:34-35)

Just before walking onto the street, organizers of the Charlottesville Clergy Call walked us through the changing dynamics of the situation. There would be four times more white nationalists in Charlottesville than previously projected. One quarter of the clergy they thought would be there actually showed up. If we stepped onto the street we were risking arrest, injury or death—from the police or the white nationalists.

We knew what we were walking into.

I was hesitant and torn and almost didn’t do it.

I imagined the devastating loss my mother would feel upon hearing of my death in Charlottesville. I felt guilty for leaving her alone just before her second knee surgery. How would she make it through? I imagined not being present to witness my nieces and nephews and family.

It was as if all that is most treasured in my life flashed before my eyes as the rest of the clergy walked out onto the street.

I sat in silence and begged God for a definitive word.
God spoke: “Be present.”

That was the call: Be present; even if it means being present on your way to the cross.

I hugged some friends who were staying back to support in other ways and asked them to pray for us.

I walked through the door and joined the rest of the clergy on the street. The rest you can see in video footage here and in pictures here.

The night before at the Mass Prayer Meeting, we were asked to reflect on why we are doing this. We were handed paper and pens and asked to write down why we are doing this—and to share it with someone in case something happened to us on the street that day. The answer to that question could be answered definitively. Here is what I wrote:

“I am here to walk in the tradition of my ancestors and bear the truth of God that we, too, are made in the image of God. I am here to bear witness that I was created to take up space in the world—to be, to live, to thrive, to lead, to love and to be connected with all.”

What strikes me now is that to bear witness to my right to live, I had to be willing to die.

This has been the cross that people of African descent and Native American people have borne for more than 500 years on US soil. Ever since the demon called Colonization led Europeans to claim the land, enslave, then remove its original inhabitants, then enslave and exploit people of African descent to work that land and build their country in the name of colonizing them (read Black History of the White House, p. 195, by Clarence Lusane) have had to risk death to bear witness to our right to live.

It has been the cross that Latino and Asian-American people have born for the past 200+ years since colonization stole land from Mexicans and declared it was now “America” and Chinese men were exploited to build the railroads and fill empty slave cabins in the shadow of emancipation. Yes, Chinese men were the next wave exploited to build the U.S. economy after the Civil War. Now Muslim and Sikh and LGBTQ people risk death to proclaim their right to live—to take up space, to flourish.

The demon Colonization claims human flourishing for its own exclusive pleasure. The colonizing spirit declares the self to be fully human—to have the right to steward the world—and all else either an asset, a burden, or an obstacle—to be eliminated on the way to the self’s exclusive “human” flourishing.

Colonization is the soil from which our nation sprung. Colonization’s truth and rightness are the underlying assumptions upon which our entire way of life rests. Colonization created the political construct of race, itself, for one purpose: to secure the exclusive right of dominion for folks deemed white by the state.

Colonization’s logic morphed from British taxes to black poll taxes and plantations converted to prison farms to Nixon’s Wars on Drugs that criminalized heroine (primarily a rich white woman’s addiction) then focus police in black neighborhoods to disrupt the black vote and secure a new generation of free black labor to build military weapons and sew Victoria Secret undies for 45 cents per day.

The logic of colonization led to the genocide, removal and missionization of Native American peoples. It led the U.S. government to break every single treaty it ever made to the native people of our land, snatching land it promised Native people they would hold in perpetuity. Standing Rock was such a land until President Trump authorized a pipeline to run straight through ancestral burial grounds rather than disrupt white neighborhoods. A federal judge declared Trump’s authorization illegal in June, but oil flow continues.

The same colonizing logic that led Republican strategist, Lee Atwater, to scheme the Southern Strategy has led Republicans to let the Voting Rights Act of 1965 rot since the Supreme Court defanged it in 2013 and Trump advisor, Stephen Miller to defend a new GOP bill that would drastically reduce legal immigration.

Today the colonizing spirit leads Christian conferences to flash all (or nearly all) white speaker lineups—without a blush, promote white worship music as the gold Christian standard around the world, and build mega churches in the mold of mega malls and amusement parks that serve hundreds of thousands music and scripture disconnected from parishioners’ local contexts and needs.

This is the spirit that led the majority of the entire white church to vote for a man who promised to “take our country back.”

We can’t get around it. The spirit of colonization drives white America, always has, and the church is no different.

This truth nearly drove me to despair today. As I poured through the tags and messages from well-meaning white evangelical leaders. They called Facebook followers to listen to leaders of color like me. Some wrote blog posts distancing themselves from Trump and outlining steps Christians can take to fight racism. Others simply shouted encouragement on Twitter… and it was appreciated.

But tears fell from my eyes three times today when I asked myself one question: Will their followers vote differently next time?

An evangelical since 1983, I went through a deep transformation of my understanding of the gospel when I embarked on a pilgrimage that led me to confront my own colonized mind. I had been viewing the gospel through the lens of people that benefitted from colonization. But that simplified, defanged, disconnected gospel made no sense when I considered this question: “Would my ancestors who walked the Trail of Tears (according to family oral history) and slaved in South Carolina and Virginia (according to slave schedules, wills, and census documents)—would they consider a gospel with nothing to say to their actual colonized lives “good news”? When I saw my colonized gospel through their eyes the answer was clear: No.

Then I realized something even more profound: Every word of every book in the scripture was written by a person who was colonized or under threat of colonization by empire. The good news of The Bible must be considered good news to the colonized!
One thing gives me hope. The cross—originally an instrument of persecution for those who dared to denounce colonizing empire.

“Pick up your cross and follow me,” Jesus said.

The only hope for our nation is that Christians will listen to Jesus.

Lisa Sharon Harper is the author of The Very Good Gospel: How Everything Wrong Can Be Made Right and the founder and principal of FreedomRoad.us (launching online Fall 2017).  Above photo taken by Jordy Yager and is used with permission.

Charlottesville, Christianity and Colonialism, Colonialsim, Evangelicals and Trump, Jesus, Lisa Sharon Harper, What does it mean to pick up your cross?
Will America Pick Up Its Cross?2017-08-142022-01-20https://auburnseminary.org/wp-content/uploads/2017/02/auburnheaderlogoonlyx2.pngAuburn Seminaryhttps://auburnseminary.org/wp-content/uploads/2017/08/Screen-Shot-2017-08-14-at-8.46.52-AM.png200px200px
Recommended Posts
Donate Join Us
Contact Us Press Releases 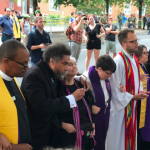 What I Saw in CharlottesvilleVoices