A film by Justin Mashouf

After 25 years of incarceration, a Muslim convert re-enters society in the Southside of Chicago to face the same streets that led to his imprisonment.  Director Mashouf’s film is a raw portrait of a man struggling with his past as a gang chief while trying to survive a life lived honestly and redefine himself in a world in which he does not feel he belongs.

All donations for the production and distribution of The Honest Struggle are tax-deductible to the fullest extent of the law. 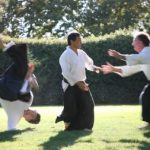